Mounts in Skyrim refer to the Horses that can be mounted and ridden. Riding dragons is a different mechanic, see dragons for more details. Horses provide a faster means for players to traverse the spacious lands of Skyrim. This page covers information about mounts in Skyrim including Creation Club contents.

To own a mount players can purchase a horse at a stable for 1000 Septim, this amount is unaffected by the Speech skill. Stables can be found outside each major city or built at a players home. Multiple horses can be owned with inactive horses returning to their place of purchase or other original locations. 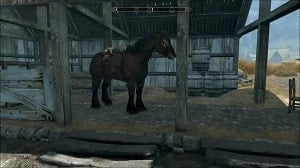 Owned mounts stay where they were last left and when players fast travel will travel to the fast travel location together with them. Stolen or borrowed horses will not remain and instead will return to their starting locations when dismounted.

Types of Mounts in Skyrim

Mounts can be split into regular horses and unique mounts. Regular horses can be purchased at stables and differ in appearance only, having the same stats and performance.

There are 3 Unique mounts, Arvak, Shadowmere and Frost, each with unique abilities that normal horses do not have. For example Arvak is a special summoned mount that can be re-summoned on demand. Unique mounts are obtained as rewards through specific quests.

The Best Mount in Skyrim

Unique mounts are all better than regular mounts, though only Arvak and Shadowmere are arguably the best mounts to use. Shadowmere has the highest Health of all Mounts and paired with its high health regeneration gives the player a very powerful mount to ride and use. Meanwhile Arvak is the most convenient mount to use, being able to summon the mount to any location on demand to assist the player. 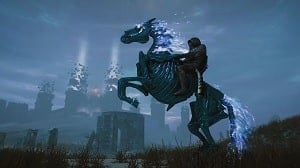 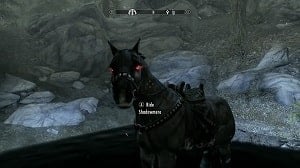 Travelling by Mount in Skyrim

Mounts interact with slopes differently to players do and can allow for climbing of extremely steep slopes. When falling from a high place on a horse, the fall damage is transferred to the horse protecting the player from the damage, this may still kill the horse but the player is kept safe. 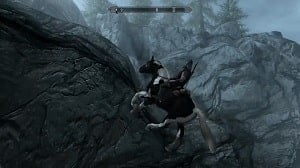 Mounted combat was introduced to Skyrim in patch 1.6. This allows players to attack using melee or ranged attacks while riding on their mount. Spells, powers and shouts are not able to be used while mounted. Mounted combat allows players to be mobile while attacking their enemies however by doing so mounts can be exposed to damage and possibly killed. 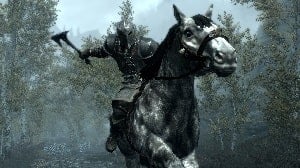 For more details look at the Combat page.

Death of Mounts in Skyrim

Mounts once dead do not respawn. Shadowmere is an exception to this having its own 10 day respawn mechanic as well as Arvak being able to be re-summoned. The stable where the horse was originally purchased will restock a new horse for purchase after some number of days so that a replacement can be bought.

Within the Creation Club Content there are additional Mounts related content that can be unlocked shown below:

The wild horses Creation adds a Unicorn mount as well as horses in the wild for players to obtain. The Unicorn mount is a unique mount with more Stamina than Shadowmere. The Unicorn can be found during the Creature of Legend quest related to it. 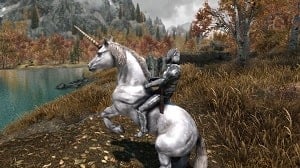 Wild Horses also adds Horse taming to the game for wild horses and for the unicorn. Horses that are tamable can be found in the wild, by repeatedly attempting to mount it the horse can become tamed.

Players are also given more options to customize their horses. Players can change the horse saddle at a stable for a price for a cosmetic change. It is also possible to change the name of the horse, speaking to the stablemaster will change the horse's name to a random one from a list.

Along with the Anniversary edition, Horse Armor has been made free for Players to acquire. Simply head to a stable and speak to a stablemaster to purchase for 500 septim with the creation installed. Horse armor come in 2 varieties, a golden colored Elven version or a silver colored Steel version. 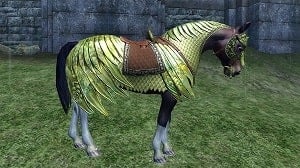 Other New Mounts in Skyrim

Players can get a Dwarven Horse or Reindeer mounts available in the Creations.